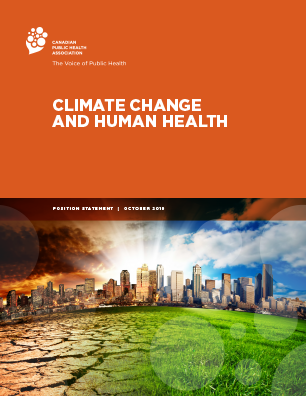 Climate change is “the greatest health threat of the 21st century”1 and it is recognized that “the effects of climate change are being felt today and future projections represent an unacceptably high and potentially catastrophic risk to human health.”2 The enormity of the challenge has been catalogued in a recent Government of Canada report.3 The effects of climate change include: overall changes in temperature, increases in extreme weather events, changes in conventional patterns of disease vectors, polar ice decline, sea level rise, and changes in plant food production patterns with their subsequent effect on human health. Our response to climate change can also be “the greatest health opportunity of this century”,4  as many of the policies needed to fight climate change could also produce health benefits, reduce health care costs, and improve social cohesion and equity in our communities.

Canada is a signatory, with 193 other countries, to the Paris Accord5 that provides a global response to the threat of climate change by requiring each signatory to establish carbon reduction goals and to take actions aimed at keeping a global temperature rise this century to well below 2°C above pre-industrial levels, and to pursue efforts to further limit the temperature increase to 1.5°C. The world is currently at approximately 1°C warmer since 1880 with approximately two-thirds of that rise occurring since the mid-1950s.6

In Canada, the average annual temperature over land has increased 1.7°C, while the temperatures in Northern Canada have increased by 2.3°C between 1948 and 2016.7 Federal, provincial, and territorial governments have committed to making change,8,9 but the work is far from complete. The Auditor General of Canada found that climate emissions in 2020 are projected to be 111 MT (megatonnes) greater than Canada’s 2020 target of 620 MT.10

Climate change will affect all areas of Canada; however, it will be most apparent in Canada’s Far North. The Arctic is warming at triple the global rate and is considered one of the more vulnerable regions to climate change in the world.11 In the Far North, permafrost underlies most infrastructure, including roads, buildings, bridges, landfills, sewage lagoons and tailings ponds. Ice road networks, built on frozen seas, lakes and rivers, facilitate delivery of food and medical supplies and enable Indigenous hunting, fishing, and gathering traditions. With few permanent roads, frozen oceans and land provide transportation links to hunting grounds. The rapid thawing of permafrost and ice roads has profound implications for the health and safety of northern people. By altering traditional ways of life, these changes will also result in further physical, social and economic disruption. Furthermore, the animals that make up the base of the Inuit diet (seal, caribou, arctic char, beluga whale, and narwhal) are vulnerable to climate change-related conditions, presence or absence of snow or ice, and a precipitation regime that determines migration timing, abundance and health.12

The Canadian Public Health Association (CPHA) recognizes the scientific consensus that, without rapid mitigation of greenhouse gas (GHG) emissions, the public health effects will only intensify.13

CPHA calls on the federal government to work with provinces, territories, municipalities, communities, Indigenous Peoples, and industries to take action in the following areas:

CPHA further calls upon public health professionals and organizations to:

Climate change is defined as a long-term shift in weather conditions that are identified by changes in temperature, precipitation, winds, and other indicators. It can involve both changes in average conditions and changes in variability, including extreme events.14 Climate change can occur naturally; however, since the beginning of the First Industrial Revolution (approximately 1760 to sometime between 1820 and 1840), human activity has had the single greatest influence. Its two greatest causes are the burning of fossil fuels and deforestation. Both activities result in the release of carbon dioxide into the environment that causes a greenhouse effect that increases temperature.

The health effects of climate change on a global scale are devastating. The 2018 Lancet Countdown on Health and Climate Change15 report found that 712 extreme weather events occurred around the world in 2017, resulting in $326 billion (USD) in economic losses; nearly a three-fold increase in economic losses over 2015. It reported that 157 million more people were exposed to heat waves in 2017 than were exposed in 2000, and that 3.4 billion weeks of work were lost due to extreme heat worldwide. It noted an increase in insect- and water-borne diseases in some regions of the world and a decrease in agricultural yield potential in the 30 countries for which data were available.15 This report identified undernutrition as the largest health effect of climate change in the 21st century.16

The Intergovernmental Panel on Climate Change (IPCC)  has identified the effects on health resulting from climate change as:

This report also paints a bleak picture of the world’s future with 2°C of warming. While it concluded that 1.5°C of warming will amplify many of the climate-related health effects that we are already experiencing at 1°C of warming, the effects of 2°C of warming were found to be far greater. For example, a 1.5°C target would protect several hundred million more people from climate-related poverty by 2050 than would a 2°C target. The World Health Organization agrees; it found that health outcomes from undernutrition, climate-related migration and climate-related infectious disease will be significantly less at 1.5oC of warming than at 2°C of warming.18 These reports are corroborated by Environment Canada’s Report to the United Nations11 and The Lancet Countdown Report.15

The average temperatures in Canada have increased at a rate greater than that for the world,7 and have resulted in twelve areas of risk from climate change. The six major risk areas and their description are summarized in Table 1, while the remaining six risks include: agriculture and food; forestry; geopolitical dynamics; governance and capacity; Indigenous ways of life; and water.19

Climate change is harming the physical and mental health of Canadians. Cardiorespiratory effects from worsening air pollution due to wildfires left many Canadians ill in recent summers.21,22 Emergency evacuations and population displacement from wildfires and floods have been associated with trauma and post-traumatic stress disorder.23,24 In the Canadian Arctic, where temperatures have increased by 2.3°C since 1948,25 health risks associated with food insecurity are increasing due to decreased access to traditional food sources.26 Meanwhile, Lyme disease has spread into new regions in Canada,27 and more intense and prolonged pollen seasons have the potential to exacerbate hay fever and asthma.28

Climate change became a reality for many Canadians in the summer of 2018. In Ontario, temperatures exceeded 30°C for 21 days,29 a significant increase over the 30-year average of 13.5 days per year that held until 2005,30 while in Quebec, the only province that monitors heat-related deaths in real-time, extreme heat claimed the lives of more than 90 people.31 British Columbia declared a provincial state of emergency as it fought to contain nearly 600 wildfires,32 while Ontario saw the number of wildfires nearly double from a 10-year average of 716 to 1312.33 In addition, millions of people in Canada were exposed to levels of air pollution rated as “high risk” and “very high risk” for days or weeks because of smoke from wildfires.34 Articles on the emergence of eco-anxiety, ecological grief and solastalgia in Canada are appearing with regularity in mainstream media.24,35

These effects, however, do not affect all people and communities equally. The more marginalized members of our communities will be inequitably affected, with Indigenous Peoples, young people and socially and economically disadvantaged populations being particularly affected.37,38 The pathways for these unequal effects include unequal geographic distribution of health risks, exclusion from health and environmental decision-making, and unequal access to health and health care. There will be direct and indirect effects on the general population due to climate change’s influence on existing social support structures, economic security, food security, and housing, yet the actions taken to address climate change could result in co-benefits to population health.39

For example, in Canada, chronic exposure to fine particulate air pollution resulting from the burning of fossil fuels is responsible for 7,100 premature deaths and $53.5 billion in health-related costs per year;40 thus climate solutions directed at motorized vehicles, coal plants, heating homes and other buildings, and oil and gas extraction, would save lives, reduce rates of heart disease, asthma and lung cancer, and cut health care costs, while reducing climate emissions.

Similarly, chronic diseases cost Canada about $200 billion per year in treatment and lost time.41 By increasing levels of physical activity through investments in public transit, cycling and walking,42 as well as developing food systems that support diets rich in plant-based proteins,43 it could be possible to save lives, reduce rates of heart disease, diabetes and cancer, and cut health care costs, while reducing climate emissions.

The effect of climate change on Canada is increasingly well documented and will continue to evolve as people and communities continue to release carbon emissions in excess of target levels. Current emission trajectories have the world on course for 2.6 to 4.8°C of warming by 2100.44 The Lancet Countdown 2018 Report concluded that: “Trends in climate change impacts, exposures, and vulnerabilities demonstrate an unacceptably high level of risk for the current and future health of populations across the world,” and that both human lives, and the health systems upon which people are dependent, will be at risk unless steps are taken to significantly reduce climate emissions and increase our resilience to the climate change that is now inevitable.16 It is essential that all people work to reduce their personal carbon footprint.

To prevent global warming from reaching 2°C, the IPCC has concluded that collectively we have to reduce climate change-causing emissions by 45% by 2030 and to zero by 2050.18 To do its fair share, Canada will have to double its existing pledge and cut climate emissions by at least 60% below 2005 levels by 2030.45 Current and future Parliamentarians will be responsible for setting this target and establishing the policies and programs needed to realize it.

Adaptation policies, however, can help reduce the health effects associated with some elements of climate change. Those interventions that show signs of effectiveness have been reviewed elsewhere.18 From a human health and wellness perspective, generic interventions could result in reduction of socio-economic disparities and enhancement of protection and support for vulnerable populations. Similarly, heat-related effects could be mitigated by issuing timely advisories, providing access to air conditioning and green space and developing and maintaining resilient power grids. Adverse effects on physical and mental health could be reduced through comprehensive disaster preparedness that includes recovery operations combined with long-term and sustainable physical and mental health programs. Emerging zoonotic infectious threats can be partially mitigated through public advisories, training, and outreach initiatives. Incumbent with these activities is the need for adequate monitoring, surveillance and epidemiological capacity, and research to support these adaptive approaches.

The United Kingdom reduced its climate emissions by 41% between 1990 and 2016 as a result of the Climate Change Act, which led to long-term, legislated targets with policies subject to continuous evaluation by an independent scientific body.46-48 In Canada during the same period, emissions increased from 603 MT to 704 MT.49 A target-based, policy-driven plan with broad support should provide a similar response in Canada.

We are running out of time. By the time today’s toddlers are in high school, our window for the most effective action will have closed. We are the last generation that has the opportunity to make the changes needed to avoid catastrophic climate change. Climate change must be treated like the public health emergency that it is.

* Fair share refers to the concept that the world’s wealthier countries should take stronger steps to address climate change than developing countries. Overall, developed countries are the greatest consumers of resources and as such should pay the greatest amount to clean up.