Public Health in the Context of Health System Renewal in Canada 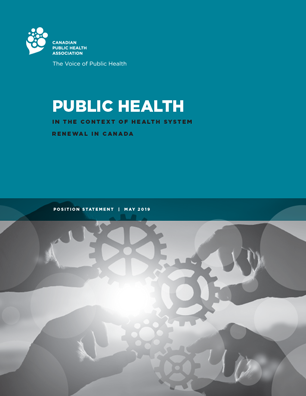 The Canadian Public Health Association (CPHA) has a history of contributing to the discussions concerning the development and renewal of the public health systems* in Canada. This statement, CPHA’s latest contribution, comes at a time when public health systems in some provinces and territories are being reorganized and in some cases reduced in size. The resulting changes have raised concern that these systems will no longer be able to meet the current mandate nor address future demands. The Association’s commentary concerning these changes is provided in two parts. The first is a background document that summarizes the factors that have contributed to the current status of Canada’s public health systems. That paper was prepared with the support of an expert advisory panel of established Canadian public health professionals, and CPHA’s Public Policy Committee and Board of Directors. The second is CPHA’s position statement in response to these changes. It is recommended that the background document be read first, followed by this position statement.

In recent years, several provinces and territories have undertaken health system reorganizations that included restructuring the public health and health promotion functions, including, in some instances, funding reductions. Serious concerns have been expressed regarding the future of public health following these reorganizations, including the systems’ capacity to meet performance expectations and service delivery requirements.1-3 The provincial governments that undertook these changes have viewed them as a means of better aligning public health and health promotion services with those of health care delivery, and better managing health system costs. Those opposed to the changes viewed them as reducing the autonomy, capacity and authority of public health organizations. Arguments can also be made concerning the actual cost savings resulting from these reorganizations and the effects on existing programs. Unfortunately, scant evidence or analysis exists in Canada to either refute or substantiate the claimed effects of recent structural changes and funding reallocations. These changes originated at the provincial and territorial level of government but were felt at the local/regional levels. It is anticipated that these types of reorganizations will continue to occur.

The practice of public health† is a unique function of government, but is often perceived as being closely aligned with the delivery of primary care,‡ which often leads to confusion concerning the value of public health. It is also relatively more affected by the changing social and economic environments, which affect public health program requirements and the way in which these services are delivered.4

CPHA recognizes the right of governments to organize themselves as necessary to meet their constitutional, legislative and policy mandates, but believes it is important to highlight the improvements in quality of life, cost savings and cost efficiencies that public health programs and services provide to Canadians. The Association is concerned that reorganizations of public health services will limit or eliminate public health programs and limit the roles and responsibilities of executives responsible for delivering these programs, thereby reducing the positive effects that public health programming has had on society while limiting any further improvements. The challenge is then to design and implement health systems in such a way that public health principles, objectives, roles, responsibilities and resource allocations are maintained within evolving governmental structures to meet current and future needs. To address this situation, the following recommendations are provided as a means of clarifying the changing roles and responsibilities of public health organizations and senior executives within government infrastructures.

The Canadian Public Health Association calls on all levels of government and local and regional health authorities with responsibilities for public health service delivery, and public health professionals to undertake the following actions:

The public health officials providing the competencies necessary to meet these requirements have traditionally been maintained within an autonomous public health organization within government. In most cases, these organizations are led by a chief medical officer of health who has been provided a degree of independence to comment on public health concerns, which is unusual within the ranks of senior government executives.

The improved understanding of the social determinants of health has led to a further expansion of the roles and responsibilities of public health organizations.9 However, with this evolution, the roles of public health have focused on responding to the health outcomes of, for example, food, income and housing insecurity, while the policy levers for addressing these challenges rest in non-health related government organizations. This shift in relationship can be expected to continue as the influence of the ecological determinants of health10 becomes increasingly evident and health equity becomes further integrated into public health practice, while the shift to an information-based economy will affect the way Canadians learn, work, play and love. This changing landscape also underlines the importance of developing relationships with Indigenous Peoples, and the complex interweaving of legislation, regulations and agreements that govern delivery of health care and public health services to them.

Coupled with this changing environment are the expectations that Canadians have of their governments, including, in part, providing the services necessary to maintain an equitable, just and free society while maintaining or, preferably, reducing all forms of taxation. These drivers are forcing all levels of government to reconsider how they organize and fund activities. As health services consume upwards of 40% of federal, provincial and territorial budgets, the organization and delivery of these services, including public health, are under scrutiny. In several provinces, reorganizations of public health services/departments with or without budget reductions have occurred;1-3 however, the effects of these reorganizations have yet to be adequately measured. These reorganizations also have resulted in uncertainty within the public health community concerning its future.

A QUESTION OF GOVERNANCE

Underlying these challenges are two areas of concern. The first relates to the legislative and regulatory framework that is fundamental to the delivery of public health services in Canada. The second is related to the authorities vested in the executive level function responsible for overseeing public health (Chief Public Health Officer/Chief Medical Officer of Health/Provincial Health Officer/National Public Health Director).

Responsibility for providing health services falls under the authority of provinces and territories, while the federal government provides a national coordinating function, national programming to address areas of common interest (including quarantine and biosafety), and management of international relations. Further description of this framework is provided in the background document supporting this position statement. The roles and responsibilities of municipal or regional public health service providers vary among provinces and territories, but are drawn from the existing provincial and territorial legislation, regulation and directional documents. The role of the local/regional public health organization is one of service provision within their jurisdiction to meet the needs of the local population, with direction being provided by a public health official.

Within each province and territory, the public health mandate is described in legislation, regulations and other supporting documents that are unique to that jurisdiction and identify the core functions, roles and responsibilities to be undertaken by the bureaucracy. In general, those PTs with more modern legislation define roles and responsibilities that better reflect the current description of the core functions of public health, while those with older legislation may not reflect these functions. An additional consideration is that provincial and territorial governments have the authority to organize themselves as they deem appropriate to meet their obligations. Governments are known to reorganize themselves from time to time for a variety of reasons, including: advancing short-term partisan goals and promises; adding new programs; strengthening existing programs; adjusting mature programs; increasing efficiency or reducing overlap and duplication; or eliminating programs that are deemed unsuccessful or have reached the end of their life cycle.

Public health staff and programs who work with specific groups and populations bring together a diverse set of disciplines and use a set of public and population health competencies that contribute to a shared agenda of health promotion, disease prevention and health protection.  The oversight of this diverse workforce requires a public health leader (e.g., medical officer of health) who has the responsibility to enforce the public health act, and the authority to direct the activities of those staff, and to mobilize during times of response activities. Without such leadership, there is a likelihood that those staff functions may become misaligned with the overall population and public health goals, or that system pressures may lead to reductions in public health programs without understanding the implications of such changes.

LOOKING TO THE FUTURE

Further complicating these considerations is the changing nature of science and society, which may affect public health practice. While it is important to maintain vigilance in addressing existing public health challenges, care must also be taken to prepare for the future. The 2014 report of the Chief Public Health Officer of Canada identified health risks as a result of climate change, technological innovation and an aging population as the primary challenges to public health in Canada.4 In addition, the increasing incidence of mental illness and poor mental wellness is of concern, as is the development of approaches to respond to the needs of an increasingly diverse population. Of particular concern is the development of approaches to respond to the needs of Indigenous Peoples; the challenge for public health practitioners will be to build the relationships necessary to become trusted partners on this journey to reconciliation.

These factors will continue the shift in responsibilities for public health organizations and practitioners, resulting in a rebalancing of public health challenges from one where policy levers existed within the health mandate, to one where public health professionals will continue to respond to these existing pressures, but must also respond to situations where policy levers are outside the health mandate. As such, public health practitioners must enhance their capacity to work within and manage complex adaptive systems that demand integration of people from all sectors.

In order to assist all Canadians to achieve their full health potential, health systems must be designed and implemented such that public health principles, objectives, roles, responsibilities and resource allocations are maintained and upheld. Public health is a governmental responsibility and the organizations performing public health functions are subject to the strictures placed on government organizations. It must meet the mandates provided in constitutional law, and the various legislations, regulations and directional documents at the federal, provincial/territorial and municipal/regional levels. The mechanisms for delivering these mandates, however, are the purview of elected governments and the officials they direct. This situation is further complicated as public health is a unique function at the population level that is often closely aligned with the provision of primary care services at the individual level. From a machinery of government perspective, the challenge lies in determining whether public health systems have the structure and flexibility to respond to our current and future needs; distinguishing public health services from primary care delivery; and then determining where core public health services should reside and at what level of resourcing. The proposed recommendations provide a roadmap for enhancing public health systems such that they can uphold and sustain the health of all Canadians.

For a more complete discussion of the role of public health in the context of health system reform, please see CPHA’s background document.

* For the purpose of this paper, the term public health systems refers to the complex adaptive network at the federal, provincial, territorial and municipal/regional levels of government, and includes the departments, agencies, units, organizations, teams and programs that deliver public health services to Canadians. It does not refer to Canada’s publicly-funded health care systems.

†Public health is defined as the organized efforts of society to keep people healthy and prevent injury, illness and premature death. It is a combination of programs, services and policies that protect and promote the health of all Canadians (PHAC, 2008). Such programs are delivered at the population level.