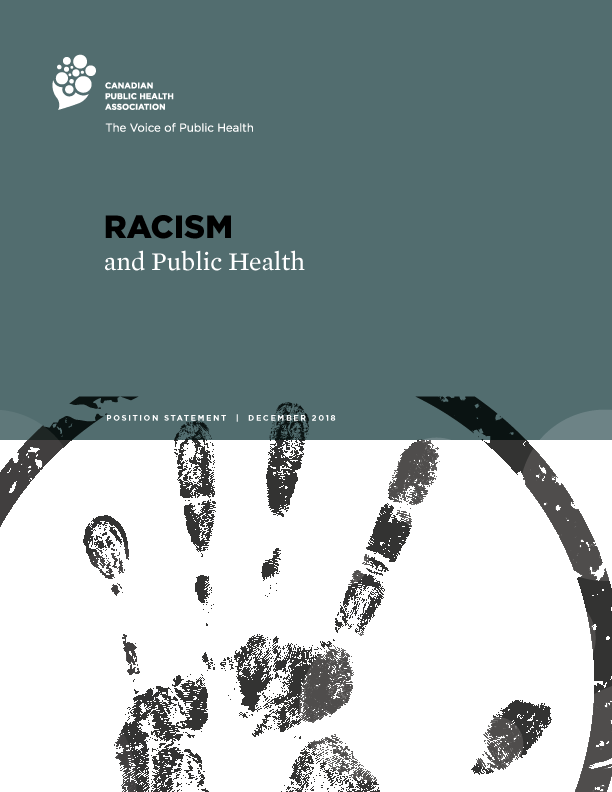 Canada remains a nation where a person’s colour, religion, culture or ethnic origin* are determinants of health that result in inequities in social inclusion, economic outcomes, personal health, and access to and quality of health and social services. These effects are especially evident for racialized and Indigenous peoples as well as those at the lower end of the social gradient and those who are incarcerated (populations that are also disproportionately composed of racialized and Indigenous people). Complicating this scenario are government and non-governmental systems that impose barriers on those in need which limits their ability to obtain the services and benefits that are easily available to most Canadians. Steps must be taken to eliminate these systemic barriers.

The Canadian Public Health Association (CPHA) recognizes that we are all either overtly or inadvertently racist and that the influence of this racism affects the health of individuals and populations. As an Association we commit to eliminating any racist processes within the Association and advocating for the elimination of racist and oppressive systems, laws, regulations and policies in Canada’s public institutions and society in general.

Responding as an Association

CPHA acknowledges that, throughout its history, the Association has been slow or reticent to respond to systemic racism. CPHA further acknowledges its role in maintaining the underlying structures and attitudes that have resulted in racist behaviour within the Association, and among the public health and governmental structures it wishes to influence. One such example was the Association’s slow response in speaking out on the federal government’s failure to adopt Jordan’s Principle.

To address this situation, CPHA is committed to a series of reforms that include the following actions:

In addition to these actions, CPHA has established an Indigenous Relations Advisory Committee to guide organizational transformation that includes Indigenous people and perspectives in all aspects of CPHA’s work, especially its public health advocacy for Indigenous peoples. A renewed Diversity Working Group will monitor and evaluate the Association’s efforts on a regular and ongoing basis.

CPHA calls on all agencies and organizations involved in education, research and the provision of health and social services in Canada to:

CPHA calls upon all levels of government and governmental agencies to:

CPHA supports and will report on the federal government’s current efforts to:

Section 7 of the Canadian Charter of Rights and Freedoms states that all Canadians have “… the right to life, liberty and security of the person and the right not to be deprived thereof except in accordance with the principles of fundamental justice.”3 This right underlies the concepts of social justice, health equity and the social determinants of health, which are foundational to public health.†

Racism is a social construct that has been embedded in institutions for generations, and currently is defined as:4

It has been argued that these definitions do not capture the ideological nature of racism, which found its modern origins with European scientists in the 17th century during the Atlantic slave trade. At that time, racism was a means of differentiating Europeans, with privilege and an indication of superiority, from persons of colour.5 Racism is now based on systems that distinguish individuals based on colour, religion, ethnicity, and culture; clearly separates individuals based on those traits; and limits racialized populations’ access to goods and services necessary for living. Complicating this description is the intersectionality of racism whereby the overlap of various social identities (race, gender, sexuality, and class, for example) contributes to the specific type of systemic oppression and discrimination experienced by an individual,6 and the structural violence resulting from the policies, programs and systems which define our social infrastructures.7

The corollary to racism is white privilege,‡ where an unearned advantage is provided due to race. Efforts are required to both identify and remove those processes and systems that support racist actions and white privilege, and to undertake actions, such as ongoing cultural humility training, to inform, correct and prevent the reoccurrence of these behaviours. Efforts should be made to monitor organizations and people for racist behaviour and to undertake corrective actions.

Racism is insidious and affects all aspects of life. It is correlated to poorer health outcomes for those subject to the behaviour, with the strongest and most consistent findings (from the United States) associating the results of racist behaviours with negative mental health outcomes, negative physical health outcomes (hypertension, low birth weight, heart disease and diabetes), and negative health-related behaviours (cigarette smoking, alcohol use and substance use).8 A 2012 report published by the Wellesley Institute has indicated that such relationships are more difficult to track in Canada as care registry data does not regularly record race or ethnicity statistics;9 however, significant associations were found between self-assessed poor or fair health and the experience of racism. The reasons given for this effect include:

Racism in Canada has many faces as it transcends ethnic, cultural, religious and gender boundaries. Two forms that are particularly egregious in Canada are anti-black racism and our treatment of Indigenous populations, as both groups are disproportionately represented in the lower segment of the social gradient and within our incarcerated populations. Anti-black racism is ubiquitous in many Canadian institutions and is responsible for perpetuating contemporary black poverty and unemployment, racial profiling, law enforcement violence, incarceration, immigration detention, deportation, exploitative migrant labour practices, disproportionate child removal and low graduation rates.10

The most egregious example of racist laws, regulations and policies in Canada, however, is our treatment of Indigenous peoples, where the results of racism, colonization, genocide and structural violence include dislocation of First Nations, Inuit and Métis peoples from their land, culture, spirituality, languages, traditional economies and governance systems, resulting in the erosion of family and social structures. In particular, Indian and Métis residential and day schools resulted in, among other things, widespread physical, psychological, emotional and sexual abuse of children. These effects have left many survivors unprepared to become parents themselves, resulting in dysfunctional family relationships, substance use issues, and physical and sexual abuse. Similarly, the implementation of the Indian Act and the enforcement of the reserve system have exacerbated these effects for First Nations peoples. It is an example of racist colonial legislation that continues to exist today. A description of the effect of this racism on Indigenous peoples in Canada can be found in the report of the Truth and Reconciliation Commission11 and the associated Calls to Action.12

Similarly, systemic issues with Canada’s First Nations child welfare programs have resulted in the removal of children from their family home instead of a focus on prevention and early intervention. In a perversion of the federal government’s responsibility to First Nations, the level of federal funding provided is linked to the number of First Nations children in custodial care, turning the children into ‘commodities’. A similar effect holds true with the Métis and Inuit.13

Additional effects have been identified as:14

The relationship between racism, the social determinants of health and Indigenous peoples of Canada has been described in a series of three publications and a webinar prepared by the National Collaborating Centre for Indigenous Health15,16,17,18 as well as a series of resources curated by the National Collaborating Centre for Determinants of Health (NCCDH) along with a blog summarizing NCCDH’s on-going work to become an anti-racist organization.

Similarly, CPHA has expressed its concerns in several areas where systemic racism is common, including: work on stigma and sexually transmitted and blood-borne infections, missing and murdered Indigenous women and girls, sex work, and Jordan’s Principle.

One result of racism is stigma. The dictionary defines stigma as, “A mark of disgrace associated with a particular circumstance, quality, or person.”19 This definition does not capture the complexity or breadth of the effects of stigma. The Joint United Nations Program on HIV/AIDS (UNAIDS) further defines stigma as, “A dynamic process of devaluation that significantly discredits an individual in the eyes of others. When stigma is acted upon, the result is discrimination that may take the form of actions and omissions.”20 This definition has also been delineated into several interrelated types of stigma, including:

Canada should be a country where every person has the ability to reach their full health potential regardless of their colour, religion, culture or ethnic origin. Steps are required by all levels of government, organizations and citizens to identify and take corrective action to eliminate racist behaviours. These actions are neither simple nor easy, but they are essential if Canada is to become the inclusive nation that is embodied in its Constitution. To this end, CPHA will undertake the steps outlined in this document to eliminate racism within the Association and encourage the elimination of racism within Canada.

* The Canadian Institute for Health Information has indicated that they are developing standard definitions for racialized groups and ethnicity to inform data collection and facilitate health inequalities measurement.

‡ A further description of white privilege can be found at: https://www.tolerance.org/professional-development/on-racism-and-white-privilege.