Invest in renewable energy for healthy, green and just communities

Over the coming years, the Canadian government will be investing in programs and policies to kick start our economy and get people back to work after the COVID-19 pandemic. These investments provide an opportunity to rebuild our economy and communities to address the growing threat of climate change, make our communities healthier and more resilient, while reducing the health inequities that have been highlighted by the COVID-19 pandemic.

To create a more sustainable world, we must significantly reduce our reliance on fossil fuels because their extraction and use releases greenhouse gases (GHGs) that cause the global warming that is disrupting ecosystems around the world. The transition away from fossil fuels will require a fundamental transformation of our society. Where we have used coal, oil, natural gas, gasoline and diesel to power our factories, heat our buildings, and fuel our vehicles, we will need to use electricity in the future.

To meet these growing demands for electricity, we will need to expand our power grid and make it more reliable and resilient, while ensuring that the electricity generated emits no GHGs and produces as little air and water pollution as possible.

Canada is fortunate to have a relatively low-carbon electricity sector. In 2018, 82% of Canada’s electricity was generated from carbon-free sources that emit no GHGs:

Biomass, such as wood pellets, is considered a renewable resource only if it is consumed at a slower rate than it can be produced. Biomass however releases air pollutants when used to generate electricity so is not an emissions-free source of electricity.

The four provinces that contribute most to GHG emissions from Canada’s electricity sector are: 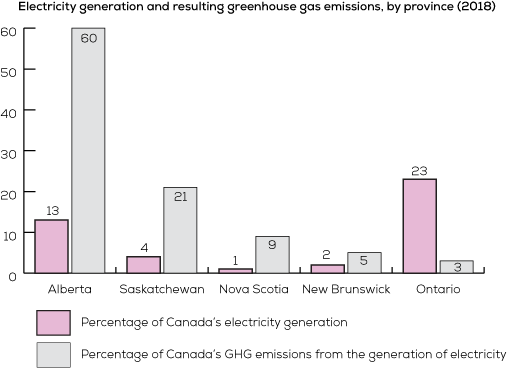 Renewable energies are a practical and affordable option for Canada

Over the last decade, renewable energies have become a practical and affordable option for Canada. A 2019 Alberta study found that it would cost less to generate electricity using a clean energy portfolio than with new natural gas-fired power plants. A clean energy portfolio consists of renewable energies such as wind and solar power, that are supported by battery storage, policies that provide flexibility with regard to energy demand, and measures that increase energy efficiency (such as building retrofits).

Air pollution continues to be a major health concern in Canada

Despite significant improvements in air quality in some regions of Canada over the last few decades, air pollution is still responsible for a significant burden of illness. Approximately 14,600 people die prematurely each year from heart disease, strokes, lung cancer and chronic obstructive pulmonary disease because of air pollution. These early deaths also represent many more adverse health impacts that result in emergency room visits, hospital admissions, visits to doctors, and lost time from work and school.

Coal-fired power plants emit significant quantities of the air pollutants, sulphur dioxide (SO2), nitric oxide (NO) and nitrogen dioxide (NO2). These air pollutants can aggravate heart and lung conditions, and harm the heart and lungs directly. They also contribute to the formation of ground-level ozone, which triggers most of the smog alerts in Canada, and fine particulate matter (PM2.5), the air pollutant that is most clearly linked to heart and lung diseases, including lung cancer, and premature deaths.

Air pollution is harmful to everyone, but it presents a greater risk for young children, older people, and those with pre-existing health conditions such as asthma. It also presents a greater risk to certain groups within Canada – including people who live on lower incomes, newcomers, Indigenous Peoples, racial minorities – who already experience higher rates of illness and premature deaths because of social disadvantages.

Estimates from 2014 indicate that the 14 coal-fired power plants operating in Canada are responsible for approximately 160 premature deaths and 140 hospital admissions or emergency room visits, and many other adverse health conditions in a single year. These adverse health impacts have been valued at approximately $800 million per year.

Mercury is a persistent toxic substance that accumulates in the aquatic food chain. Prenatal and early-life exposure to mercury (resulting from the consumption of mercury-contaminated fish) is linked to adverse developmental impacts such as reductions in intellectual abilities and motor skills. Women of childbearing age, pregnant women, young children, and populations that depend on fish as a traditional food source, are at greatest risk from mercury. In the early 2000s, coal plants were responsible for approximately 18% of mercury emissions in Canada. Renewable energies and natural gas-fired power plants release no mercury or other toxics into the air or water when used to generate electricity.

In order to avoid catastrophic levels of global warming, international organizations have concluded that all countries must reduce climate emissions by 45% by 2030 and to net zero by 2050. By accelerating the phase-out of Canada’s coal plants to 2030, it is estimated that Canada could cut its total GHG emissions by 8.5% by 2030.

Natural gas (methane) was once viewed as a bridge fuel to a low-carbon future. While natural gas plants release 50 to 75% fewer GHGs than coal-fired power plants, they still emit a substantial amount. In addition, significant quantities of methane can be released during the extraction process. Because its global warming potential is many times greater than that of carbon dioxide, methane emissions are a concern for climate change and may be responsible for up to 15% of Canada’s GHG emissions. Renewable energies release no GHGs when used to generate electricity and they do not require extraction to be utilized.

The physical and mental health of people in Canada is already being harmed by climate change. In different parts of the county, climate change has contributed to an increase in the frequency and intensity of floods, wildfires, hurricanes, ice storms and heat waves over the last several decades. These events have exposed millions to extremely high levels of toxic air pollution, forced hundreds of thousands to evacuate their homes, and left hundreds of thousands without power for extended periods. Climate change is also melting permafrost in the far north, increasing sea levels on three coast lines, and extending the range of vector-borne diseases such as Lyme disease.

While climate change affects everyone, it has a greater impact on some. Young children, older people, and people with pre-existing health conditions are more sensitive to heat waves and wildfire smoke. Indigenous Peoples in northern communities can experience greater food insecurity as melting permafrost and changes in animal and plant populations disrupt their access to traditional food sources. In addition, people who live on lower incomes may not have the resources to protect themselves or recover from extreme weather events such as heat waves, wildfires and floods.

Investing in a healthy, green and just recovery

In the updated climate action plan for Canada, the federal government promised to:

These essential investments will prepare our country for a healthier and more sustainable future.

It has been estimated that investing $6.7 billion over a 10-year period in the creation of a carbon-free and resilient electricity grid across the country could create almost one million jobs, virtually eliminate 75 million tonnes (Mt) of GHGs, and improve public health.

Raise your voice to express support for greater investments and a faster transition to renewable energies to create healthy, green and just communities.

For more information, see our Backgrounder on Renewable Energies.