In 2015, the Haliburton Kawartha Pine Ridge District Health Unit (HKPR) had the opportunity to weave health equity into their active transportation work.

Public health staff at the HKPR have been working to improve health in their district by promoting active transportation for nearly 20 years. HKPR is an independent health unit serving an aging population in a mostly rural area that is comprised of three local municipalities: the City of Kawartha Lakes and the Counties of Haliburton and Northumberland. Within the counties, there are 11 lower-tier governments.

Over the years, the HKPR staff have worked with the Communities in Action Committee (CIA) to promote, plan and advocate for active transportation in Haliburton County. An HKPR staff person chairs the CIA and has cultivated relationships with community partners and staff from local governments to make their communities more walkable and bikeable. This work has contributed to the improvement of walking and cycling infrastructure and amenities throughout the county.

The Toronto Committee for Active Transportation (TCAT), supported by the Montreal Urban Ecology Centre (MUEC), led an Active Neighbourhoods Canada (ANC) project. When the ANC project issued a request for proposals to communities across the country, the CIA/HKPR submitted a proposal for the Village of Haliburton that was accepted.

Nestled in cottage country about two hours north of Toronto, the Village of Haliburton is governed locally by the Municipality of Dysart and regionally by Haliburton County. The county has a year-round population of 17,000 that expands to 45,000 during summer months.

The proposed ‘neighbourhood’ was a 5 km section of a County Road 21 that leads into the village. This stretch of roadway serves two incompatible functions; it is a local roadway that connects the village to other towns in the country, and it increasingly serves the village as a ‘linear neighbourhood’. The challenge was to make this stretch of highway into a more complete street that accommodates pedestrians and local businesses while also allowing efficient travel for vehicles passing through the village.

“There was a lot of development happening along County Road 21 at the time with the addition of a coffee shop, grocery story, and hardware store,” noted Sue Shikaze, who was a Health Promoter with the Healthy Communities team at HKPR at the time. “Students in a local neighbourhood were bussed to school even though their school was within walking distance because it was on the opposite side of County Road 21.”

“There was also an affordable housing complex for individuals, seniors and families – the Whispering Pines Assisted Living Residence – that was home to a number of seniors who used mobility devices,” said Sue. “These people had no way to get into town without travelling along the road using their mobility devices.”

“We wanted to develop an active transportation plan for this corridor with an equity perspective,” explained Sue. “A significant number of people in this community cannot drive because of age or ability. We wanted to ensure that this road corridor, and the destinations along it, were accessible to everyone including those who cannot drive.”

The ANC did not offer project partners funding; rather, they made two people with expertise in community planning available as resources to the project instead.

The ANC team worked with the CIA and HKPR to develop the project that included three phases.

In the first phase, demographic and travel data was collected and Focus Groups were convened at a local restaurant, with students at the high school, with residents at the assisted living residence, and at a local neighbourhood association meeting. At these meetings, people were asked to identify what was and was not working with travel in their neighbourhoods.

“We made a point of engaging with the residents most directly affected by the existing street design with a particular focus on those who cannot or do not drive,” said Sue. “We took the focus group meetings to them to make it as easy as possible for them to participate.”

In the second phase, a Charette-style Workshop was convened with local planners, engineers and architects. Participants were taken on a walking tour slide show of the neighbourhood, and presented with data, findings from the focus groups, and visualizations of possible design options. The professionals, which included staff from the county and the local municipality, were asked to brainstorm potential solutions.

In the third phase, ideas generated from the workshop were developed further by the ANC team and taken back to the community for review in the form of visualizations. These options were presented to residents at the local farmer’s market and at the assisted living residence. 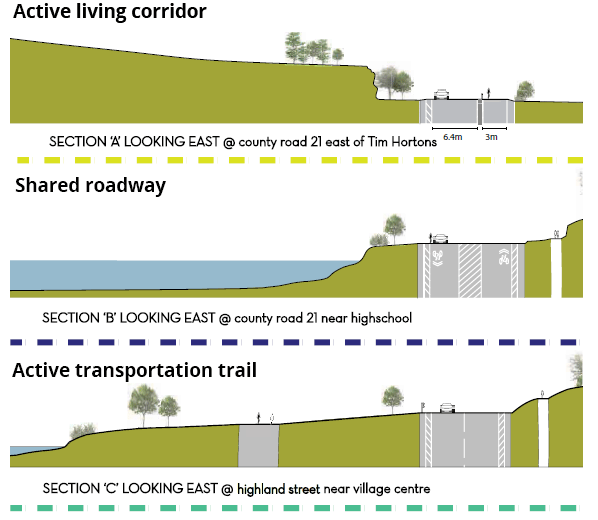 The findings and recommendations were summarized in a report prepared by the ANC team with the CIA/HKPR. The report included a number of short-, mid- and long-term recommendations designed to improve safety, increase access to services, and encourage walking and cycling as modes of transportation along the corridor and into the village.

Recommendations were directed at traffic calming, making intersections and parking lots safer for pedestrians and cyclists, and adding safe infrastructure along the roadway for active transportation. The report was provided to the county that was concurrently preparing to work on a corridor study for the area selected.

While the recommendations had the potential to increase physical activity and reduce dependence on vehicles for all residents in the village, they were particularly beneficial for those residents who cannot drive or do not have access to motorized vehicles.

“While we have been focused on increasing levels of physical activity and access for people of all ages and abilities in our community, we appreciate that this work reduces greenhouse gases that contribute to climate change as well,” said Sue. “Every trip that is made using active transportation is a trip that is not made in a motorized vehicle that emits air pollutants and greenhouse gases.”

The CIA and HKPR consider the ANC project a success because:

“While the county was conducting its own corridor study for the area, they did not have the capacity to engage the community to the extent that we did,” noted Sue. “Our consultations provided a voice to people who are often not heard, but who are impacted by transportation projects. It was very rewarding to hear the active transportation needs of some of the under-served residents in our community and to see their needs reflected in the county’s corridor study.”

The CIA and HKPR identified the following as valuable lessons from this project: