For several years, Vancouver Coastal Health (VCH) has been working to address the social and environmental determinants of health by engaging at a high level in the strategies and plans that shape the region it serves.

Nestled on the west coast of British Columbia (BC), Vancouver is a seaport city and the largest city in BC with a population of 613,485 people. It is also part of Metro Vancouver, which includes cities such as Richmond and North Vancouver, and has a population of 2.5 million people. Vancouver is one of the most ethnically diverse cities in Canada with more than half of its population speaking a first language other than English.

Vancouver Coastal Health (VCH) is the public health agency responsible for community health for over 1.25 million people – nearly one quarter of BC’s population – including the residents of Vancouver, Richmond, and many communities along the North shore and coastline. VCH is one of five Regional Health Authorities in BC, an arms-length agency of the Province that is governed by an independent Board of Directors who are appointed by the Province.

“VCH is an arms-length agency of the province,” noted Dr. Michael Schwandt, Medical Health Officer (MHO) for Vancouver. “This gives us more independence from the Province than public health agencies in other provinces that are embedded directly in a provincial department, while still providing valuable provincial support and coordination.”

Several years ago, VCH established the Healthy Environments (HE) Team to address the physical and environmental determinants of health, including environmental exposures such as air pollution, noise, heat, and wildfire smoke, and the linkages between health and the built and natural environment including community design, housing, transportation systems, parks and greenspace.

“In public health, we work to prevent illness, disease, injuries and premature deaths by addressing the upstream factors that affect population health,” explains Laura Chow, Senior Planner with the HE Team. “The HE Team works to protect and promote health by helping to create communities that have healthy environments, foster physical activity and social cohesion, and provide equitable access to jobs, services, parks, housing and greenspace.”

The HE Team uses health evidence and data, policy research, inter-sectoral collaboration, and advocacy to promote and support policies and plans that can protect people, promote healthy living, and reduce health inequities. It has engaged in a number of strategies, plans and proposals that are expected to have a significant impact on community design, environmental health, and climate action in the Vancouver region including:

“We use a similar approach in each case, while tailoring our work to the scenario at hand” offers Dr. Schwandt. “We engage with key people in the organizations responsible for the plans we want to influence. We explain how their work can positively or negatively impact public health and ask how we can get involved. We provide formal comments during consultation processes and then express our support to decision-makers when policies are being considered for approval.”

For example, VCH worked closely with TransLink, the agency responsible for planning and managing public transit, major roads, bridges and trip planning for Metro Vancouver, during the development of the long-term regional transportation plan – Transport 2050. The HE Team met early in the process with TransLink staff to identify the positive health outcomes that can be associated with a well-designed public and active transportation network and how the system can best leverage these outcomes. Working with VCH’s Population Health team, the HE Team reviewed and commented on several drafts of the plan that were released for stakeholder or public feedback. At the end of the process, VCH presented to the Mayors’ Council to express support for the Investment Plan proposed to fund the plan, and to advocate for a more equitable and affordable pass option for public transit users. 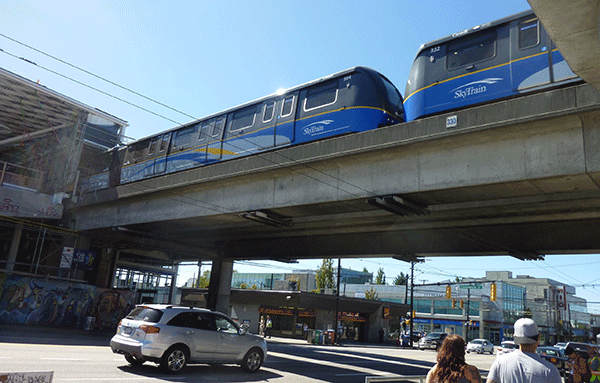 “We have addressed a wide range of social and environmental determinants of health in our formal and informal comments on various proposals,” notes Chow. “With TransLink, for example, we identified how a well-designed public and active transportation system can increase physical activity, access and social equity, while decreasing air pollution, greenhouse gases (GHGs) and vehicle-related injuries and deaths. In other processes, such as those directed at climate action plans, we have promoted policies such as equitable access to parks, greenspace and tree coverage, to improve the mental and physical health of vulnerable populations, and to mitigate the impacts of extreme heat for high-risk neighbourhoods.”

When the HE Team commented on the City of Vancouver’s proposed Climate Emergency Parking Program – a proposal intended to help fund elements of the City’s recently approved Climate Emergency Action Plan – they addressed climate change adaptation, reductions in GHGs, and health equity.

“In a formal letter to City Council, we took the position that the proposal would help the City reach its climate targets, while also creating pathways to a number of health co-benefits,” offered Dr. Schwandt. “By building a pollution charge into the cost of parking permits for more expensive and heavily polluting vehicles, we argued that the program would encourage a transition to less polluting vehicles, generate revenue to fund active transportation and an expanded tree canopy, while a number of measures included in the proposal would avoid the negative impacts that permit costs might have on social equity.”

The HE Team has also consulted closely with BC Housing, the City of Vancouver, and Metro Vancouver on new building design and existing building challenges related to climate change adaptation, health equity, and the reduction of air pollutants and GHGs.

“In informal discussions and formal submissions, we have promoted the idea that new buildings should be built to reduce, and ideally eliminate, air pollution and avoidable GHG emissions. We have pressed for technologies such as heat pumps and air filtration systems to protect people from extreme heat and wildfire smoke. We emphasized that this was particularly important for rental units for low-income populations,” offered Emily Peterson, one of the Environmental Health Scientists on the HE Team. “The new Vancouver Building By-law will provide additional protection from extreme heat and wildfire smoke, by 2025, for multi-unit residential buildings, while also implementing important requirements to reduce GHG emissions.“

The HE Team has cultivated strong and effective working relationships with staff across the region. They work with 14 different local governments, five regional districts, and two transportation authorities, among many other non-government partners and organizations.

They have had health rationale, health evidence, and health-protective policies woven into a number of pivotal strategies and plans that will help shape the development of health promoting communities.

They have helped to ensure that population health, health equity and climate change are properly considered in a number of pivotal policies and plans including the regional transportation plan, the climate action plans for the City of Vancouver and Metro Vancouver, the Clean Air Strategy for the Port of Vancouver, and the City of Vancouver’s updated Building By-law. 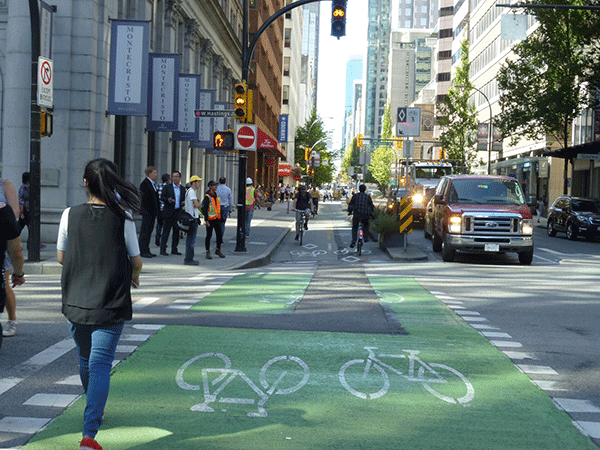 “With some organizations, we have regularly scheduled meetings where we can check in with each other,” noted Chow. “Sometimes these meetings involve an informal exchange of ideas about plans or strategies before they have even been drafted. Other times, we learn about valuable opportunities for collaboration or action.”

VCH’s HE Team have taken these lessons away from their experience:

“We need to develop better surveillance on the political landscape so we can understand how to be more effective strategically,” noted Dr. Schwandt. “With the Climate Emergency Parking Program, for example, some people may have used assumptions around equity effects to fight the permit proposal, when it was clear to us that overall, the proposal would have beneficial impacts for health equity as well as for population health and the city’s carbon footprint. Anticipating concerns around novel proposals, and presenting relevant evidence, helps us to more successfully advocate for healthy public policy.”