Heroin – A drug of choice? 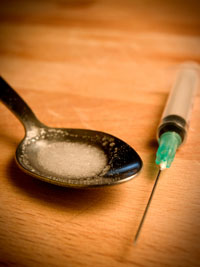 The recent deaths of actors Philip Seymour Hoffman and Cory Monteith have brought media attention to the drug problem in North America. In both cases, the drug of choice appeared to be mixed drug cocktail, involving intravenous heroin use combined with other psychoactive substances.

Heroin was once legally prescribed as a cough suppressant but became commonly known as the drug of choice for rock stars and celebrities in the 1970s. Since then its use had decreased, but there is resurgence in popularity due to pricing and availability. In the US, heroin has a price of about $1 per 10 mg.1 In addition, its purity has increased from 2-3% to 7-8% per packet (100 mg). This increase permits alternate routes of ingestion such as snorting or smoking (instead of intravenous injection), which makes the drug more appealing to first-time users.1 People who use other opioids may also be switching to heroin, as drug suppliers will mix it with other opioids to increase potency and/or duration of the high.2

The Canadian situation is a little different. In some communities, particularly on the west coast, heroin is emerging as the drug of choice as it is cheaper and more easily obtainable than the alternative (prescription opioids such as morphine, Vicodin, OxyContin and Fentanyl). This is mainly attributed to the increase in production of opium in Afghanistan (Canada’s primary source), which has driven down the price significantly. The street price is approximately $2 per 10 mg3 compared to $10 per 10 mg of OxyContin.4 Prescription opioid use, however, remains just as prevalent both on the illegal market and as part of the prescription drug use crisis.

The increasing use of mixtures of heroin and other substances adds to this story. Often, the added substances can be toxic, or are more potent opioid drugs, such as Fentanyl. In both cases, there is a potential for overdosing. Illegal use of Fentanyl, for example, presents dangers as users will scrape the drug off the patch and inject it, which leads to unknown and potentially dangerous dosages. As always, there are the expected dangers associated with risky injection practices, including the spread of HIV and hepatitis C.

Complicating this scenario is the changing face of heroin use in North America: it is becoming a middle-class and suburban drug of choice. In Canada, that demographic exists and we are also per capita the second-largest consumer of prescription opioids in the world, with the highest number of users found among women, youth, and First Nations communities.5

The question is: why is illegal opioid use so prevalent? Opioids are highly addictive and tolerance can develop very quickly. Withdrawal is difficult, which can deter users from stopping once they become dependent. Patients who take opioids for medical purposes are known to ask for increasingly higher doses from doctors and if turned away, may turn to illegal sources to meet their needs. The Ontario government has attempted to tackle the problem by removing OxyContin, the most commonly abused prescription drug, from its drug benefit program. In addition, attempts have been made to change the formula of OxyContin to discourage people from crushing and ingesting it to receive a faster effect. 6 Both of these efforts, along with stricter prescription regulations, however, have led individuals to seek the drug or alternatives through illegal means.

The challenge is that these cause and effect responses coupled with a legislative framework that favours prohibition and criminalization do not address the underlying causes of illegal drug use. People use illegal drugs for a variety of reasons, including a range of social and psychological factors, and generally initiate their use to achieve real or perceived benefits. This use is mediated by complex interactions among supply, demand, availability, accessibility, context, social norms and the legal framework. Many of these drivers are outside the ambit of public safety and health care systems, but fall within the realm of public health.

CPHA recognizes that drug use is a complex issue with no simple answers. There is also a need for a range of responses, from support of abstinence programs to supervised consumption facilities and treatment programs, to meet the needs of a continuum of users. As such, the Association supports the development and implementation of public health approaches to manage illegal drug use in Canada.

This is an important issue for CPHA and is the reason the Association has been working on a new policy statement on illegal psychoactive substances that will be released later this year.