Breastfeeding: A return on investment 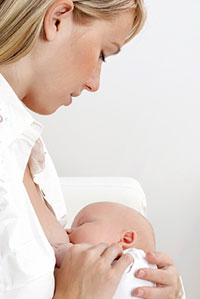 Breastfeeding is the natural way to feed newborns and infants, and an important contributor to their health. It provides nutrition, boosts immunity, and fosters maternal–child bonding.1 Babies who are not breastfed or have been weaned early have an increased likelihood of contracting otitis media, gastroenteritis, respiratory infections, necrotizing enterocolitis, diabetes and asthma and of succumbing to Sudden Infant Death Syndrome (SIDS), while mothers who have not breastfed have an increased likelihood of developing breast cancer, ovarian cancer, diabetes and coronary heart disease.1,2

These possible outcomes can have significant health care costs related to increased physician visits, treatment of infections and disease, and increased hospitalizations.3 A recent report from the United Kingdom showed that the economic costs of treating just three of these infant diseases (gastroenteritis, lower respiratory tract infections, acute otitis media) associated with not breastfeeding was £75.5 million (about CAD $121.8 million) per year.3,4 A further study investigated the potential health care cost savings that could be realized by investing in support services for breastfeeding mothers. Increasing exclusive breastfeeding rates to 65% at four months could result in potential health care cost savings of £17 million (CAD $27.5 million) annually for those three diseases.4 This increase in exclusive breastfeeding was also shown to result in net savings of £21 million (CAD $33.9 million) in breast cancer treatment costs over the lifetime of each annual cohort of first-time mothers.3,4 Although these results are not directly transferable to Canada, they demonstrate the potential for cost savings to the health care system through strengthening and investing in services that support breastfeeding mothers in Canada.

Breastfeeding went out of favour in Canada during the middle part of the 20th century, but has been on the rise since the 1970s.5 Now more than ever, Canadian mothers and newborns are getting off to a good start, with at least 89% of new moms breastfeeding in 2011-2012.6 Unfortunately, these numbers drop to 51% of babies by four months and only 26% by six months.6 Exclusive breastfeeding is recommended for the first six months of a healthy-term infant’s life.7 Canadian mothers give up breastfeeding earlier than desired because of concerns about their milk supply or difficulty with breastfeeding technique.8,9 These issues may arise, in part, through any of the following: a lack of support, hospital practices that separate babies from their mothers, babies not being allowed to feed on demand or who receive pacifiers, or mothers receiving free formula samples.9

What can be done in Canada? The Baby-Friendly Initiative (BFI) is a first step.10 BFI, an initiative developed by WHO and UNICEF in 1991 that supports, promotes and protects breastfeeding, was launched in Canada at that time and is being implemented by the provinces and territories. The Breastfeeding Committee for Canada (BCC), a volunteer not-for-profit organization dedicated to the protection, promotion and support of breastfeeding and its implementation in Canada, supports this initiative.11,12 However, most babies in Canada are not born in a Baby-Friendly hospital environment, with only 12 out of the 350 maternity hospitals in Canada having achieved BFI designation.13,14 This designation has been shown to increase breastfeeding duration and exclusivity.15 Lack of endorsement from government and hospital administrators, training for health care workers and integration with the community seems to be contributing to the lack of BFI-designated hospitals.12