Out with the smoke, in with the chew 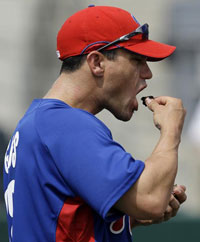 For those of a certain age, you may remember when the “boys of summer” had a cheek full of “chaw” and their full attention on the next batter. Many of us assumed that chewing tobacco was a phenomenon unique to baseball that otherwise had passed into obscurity with the mounting evidence about nicotine addiction and chewing tobacco carcinogenicity. Unfortunately, chewing tobacco is still going strong!

For many youth in competitive sports – especially baseball, hockey, rugby and football players between the ages of 15 and 24 years1,2 – smokeless tobacco products (snus), including chewing tobacco and snuff, are the new smoking.3 In recent surveys, more than half of male amateur baseball and hockey players indicated that they use smokeless tobacco products, usually out of boredom or because of the rush they get from it.1,4 Use of these products is also associated with athleticism and masculinity, according to one survey of user-athletes. Respondents also indicated that their use started in sports settings.1,5 Females appear less likely to engage in this habit because it is perceived as “unattractive”, although anecdotal information suggests that snus use is increasing among females.5-7

Snus use appears to be modeled on the behaviour of high-level athletes, coaches, and athletic peer groups.2,4 For example, professional hockey players who use smokeless tobacco reinforce its use in young athletes through on-camera appearances with mouths visibly full of chew.8

Youth athletes are often not aware that smokeless tobacco use has serious health implications, including an increased risk for oral cancer.9 This risk became a reality for professional baseball player turned anti-tobacco crusader, Bill Tuttle, who lost his cheek, and his life, to oral cancer.10 Also of concern are the highly addictive nature of nicotine11 and the potential for smokeless tobacco use to be a gateway into smoking as a means of satisfying the users’ addiction,12-14 as well as the perceived targeting of youth with smokeless tobacco products in flavours like bubble gum and banana split.14 Snus are often considered a discreet alternative to smoking by the user. As a result, many parents are unaware that their child is using snus until after he or she is addicted.2,13

Sport-specific smokeless tobacco policies have been proposed as an educational tool to prevent uptake of this habit.2 The first step may be to prohibit the use of these products by coaches and other sport personnel in the presence of young athletes, thereby reducing the risk of youth taking after these role models. In the meantime, parents should be aware that their athletic children may indulge in what Major Junior Hockey League Commissioner, Kim Davis, describes as a “precarious habit.”8